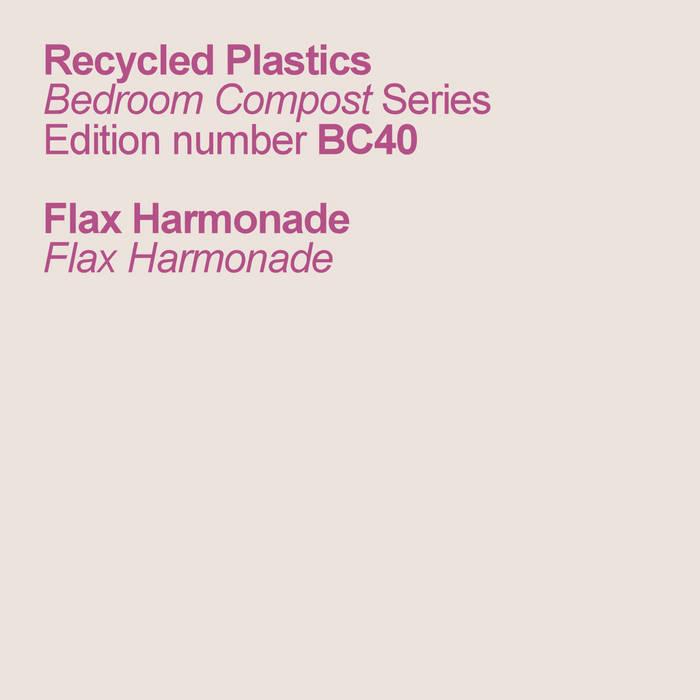 Flax Harmonade is a collaborative project between Brian Grainger and Lee Batchelor, themselves better known as Milieu and Scup Bucket. This album was their first and only release, recorded between 2004 and 2006, and released on a limited edition CD-R at U-Cover in Belgium in Autumn of 2006. Influenced by all manner of playful braindance and classic bedroom electronic music such as early Aphex, Global Goon, Ovuca, the Mike & Rich album and Cylob, among many others, Flax Harmonade is closer to the acidy melodic dance music of Milieu's Polypsilon or Academy Stripes, and was fairly out of character with his audience in 2006. As such, the FH album went somewhat under the radar of many fans, and even now we're betting that many of you have never even heard of it. So, retrieved from the dusty vaults, a weird, funky, catchy and exciting album is once again available via Recycled Plastics. Enjoy!

W/P by Brian Grainger and Lee Batchelor. Recorded in South Carolina and Maine, 2004-2006. Mastered by The Analog Botanist, 2006. This is Recycled Plastics number BC40, and 40th in the Bedroom Compost catalog. Special thanks to Koen for originally releasing our weird album, and kindly allowing us to reissue it with Recycled Plastics.