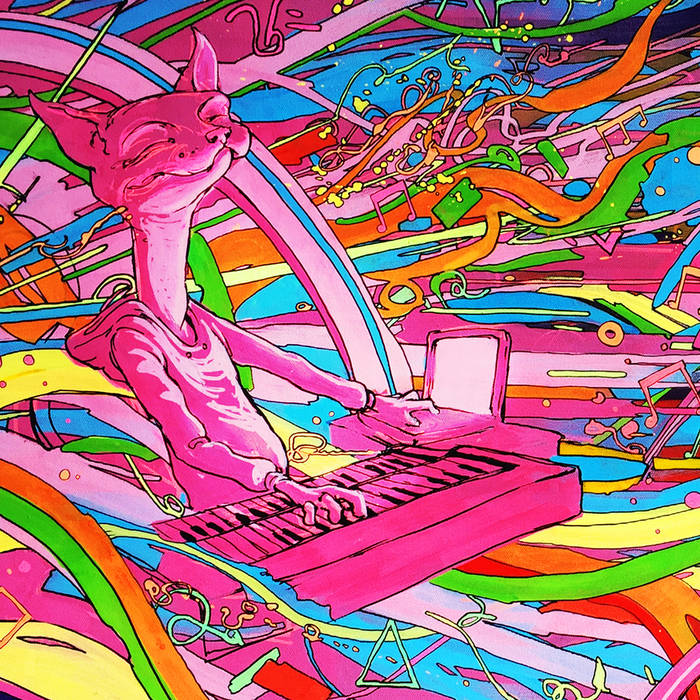 RJD I can't believe I overlooked this when it came out a while ago. What a surprising discovery! Very "colorful" music! Favorite track: Monkey Off Out.

terrier43 Hannah has a unique sound. If you like melodic electronic music you must check out this release (and her other releases of course). Some songs you'll fall in love with immediately, others will grow on you over time. A beautiful release. I went and purchased a physical copy, nice artwork and great attention to detail by Recycled Plastic. Favorite track: Icecreamvanman.

beep As a Mrs. Jynx fan since highschool when I discovered "The Standoffish Cat," this album is nostalgic and beautiful as ever. Glad to hear more from her. :) Favorite track: Sharky.

academie I've been listening to electronic music for twenty years.
Mrs Jynx returns me to the premeir experiences with joyous times. a lovely person to chat with; Mrs Jynx is humble and thankful for fans and their love of not only her music; but all finely crafted music.
Ken & Jeffy Curl
P.s. Jynx's garden
take her there again Favorite track: Easy Means.

After years of planning, compiling and remastering, Recycled Plastics is beaming with pride to present JYNX'S GARDEN, a twenty-five track retrospective of music by the inimitable MRS JYNX. Containing almost completely unreleased works, going back to as early as 2004, this collection has been lovingly tidied up and sequenced by The Analog Botanist, emphasizing depth and contour for maximum aural contentment.

Musically, Mrs Jynx's work is (perhaps topically described as) the sonic equivalent of those old Lisa Frank binders girls carried to school in the 1980's - bursting with every color you can imagine, psychedelic candy for the senses. Beneath the bright sunrays and endless blue skies, however, are some truly formidable compositional and sound-design talents. Jynx's music is inherently melodic, but there's never a dull moment in her bouncing drum machine rhythms or tight, funky basslines either. You also won't find a musician beholden to using the sounds of "classic" drum machines and synthesizers - rather, Mrs Jynx makes these machines do what she wants them to do, and say what she wants them to say.

Many of these tracks have stayed with me since I first met Hannah sometime in 2006, and I've taken them everywhere - when I performed in Germany and raved about her work to people there, and whenever I found a spot for a remix on a Milieu album (or something here at RP), I'd be able to count on her to contribute only the very best work. I was ecstatic when I found out she'd been picked up by Mike Paradinas for releasing at his Planet Mu imprint, and yet - I was always amazed that these songs didn't make the cut on either of her fantastic albums there (2008's The Standoffish Cat and 2010's Shark Carousel). So, the act of assembling such a stellar compilation of my favorite Mrs Jynx music and being able to facilitate its release at my own label, is nothing short of a career highlight for me.

I'm certain that this music will bring wide smiles and tickled eardrums to people all over the world, which is exactly what the world could use more of: Happiness. Indeed, that is perhaps the best way to sum up Hannah's sublime creations - Mrs Jynx is happiness, and all you need to do is press play.

**Extra special thanks to Nicholas Knudson, who created the original painting you see on the cover especially for this album, and to Eric Adrian Lee, who assembled the whole package into the eye-popping item you see for sale before you.

Written and produced by Hannah Davidson. Recorded 2004-2013. All tracks written in Chorlton, Manchester, apart from 'V Is For Vienetta' which was written in Mytholmroyd, West Yorkshire & 'Silkworm' which was written in the Ardèche, France. Curated, sequenced and lovingly mastered by The Analog Botanist at Botany Bay in scenic Columbia, South Carolina, 2014-2016. Original painting graciously created by Nicholas Knudson. Design and layout gently implemented by Eric Adrian Lee. This is Recycled Plastics number RP8. (c) + (p) Mrs Jynx & Recycled Plastics 2017.