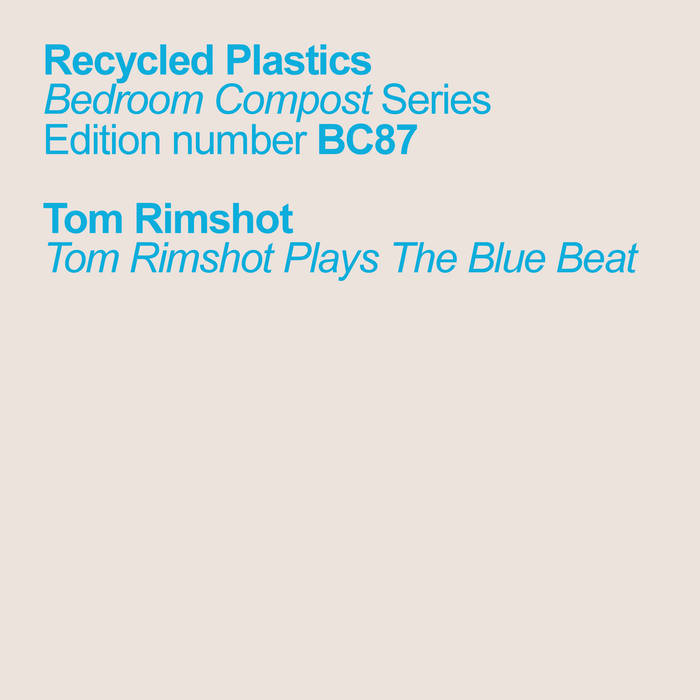 Tom Rimshot's quest for making drum machines fulfill more than just rhythmic roles has continued to mutate and evolve with each subsequent album. Going from the Yamaha QY-70 to the Korg Volca Sample, then making a single with the Yamaha RX21L on BC50, Rimshot now arrives in what could be his strongest effort to date: Tom Rimshot Plays The Memphis Blue Beat.

The Blue Beat is a very minimal machine, an analog rhythm box about the size of a guitar foot-pedal, with only eight preset patterns, and dials for tempo and volume adjustment. Originally produced in 1971 as an accompaniment for organists or guitarists, it has found a new purpose in the hands of Tom Rimshot, who sampled five of the patterns at different tempos and proceeded to use a variation on Wolfgang Voigt's M:I:5 ethos of rhythmic loop juxtaposition to create shifting and unique rhythmic passages.

Sonically, the drum sounds themselves only consist of three different tones - a sinusoidal kick drum that somewhat resembles an 808 tom, a more mid-octave pitched version of that sound for the "snare" which ends up feeling like half-rimshot and half-rack tom, and finally a higher octave sound that plays into the patterns like a percussion instrument rather than anything resembling a hi-hat (think bossa nova exotica with little woodblocks). Once this palette of sound is overlaid onto itself at multiple different pitches, the resultant techno comes out of the speakers sounding a bit like a cross-modulation between Vakio-era Pan Sonic, Voigt's Profan and Kreisel 99 recordings and perhaps even a bit of early RDJ, such as Polygon Window or Brad Strider.

The five recordings are oddly hypnotic, cleanly produced and ready for a deep experience with either your headphones or a club system, and have been paired with five "acid mixes" on a second disc, wherein the tracks were played back at different BPMs and quantizations, with an Arturia ladder-filter gain and a modulating flanger placed into the effects chain. Ten tracks for the price of five!

W/P by Brian Grainger. Recorded at White Pillar Workshop, Autumn 2020, using a Memphis Blue Beat and a mostly transparent DAW for sequencing and overdubbing. Mastered by The Analog Botanist. Text and design by ABM&D. This is Recycled Plastics number BC87, and 87th in the Bedroom Compost catalog.