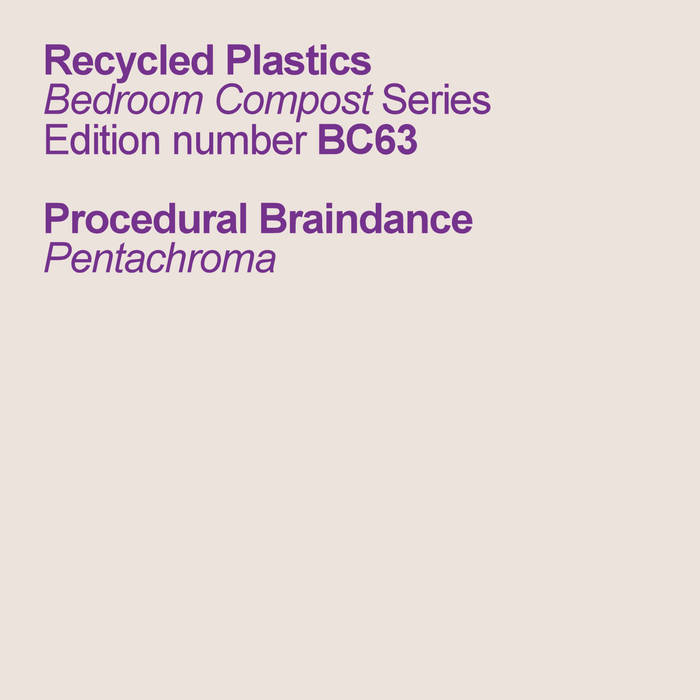 Procedural Braindance is a new project from the mind of a man named Troy, more widely known as Face Culler, which is (to our knowledge) the first of its kind. He has written thousands of lines of programming code to facilitate a software system that intelligently and intuitively generates braindance music in a matter of seconds, and performs it on a studio rig of analog synthesizers, drum machines and modular units.

Unlike the generative music of the past, this is music that has been designed to be indistinguishable from something made by a human. In this, we believe Troy has created something groundbreaking and game-changing, and we have a massive amount of pride and excitement to bring you the debut of this project at Recycled Plastics! This is a truly before and after moment in modern electronic music, and one that we feel will ripple outward for a long, long time, both in Troy's hands and beyond.

For this special occasion, Troy has indulged our curiosity and helped us put together this informative video, which explains and contextualizes what Procedural Braindance is all about: youtu.be/U6RNDRj6J2M

Musically, Pentachroma is an album that refuses to be outshined by the process that created it. If it were never made apparent that these pieces were created by a machine, we would be none the wiser about it. The album is virtually bursting with melodic color and variance - burbling acid lines bouncing over tight, funky drum patterns, and a nearly-constant barrage of fat, warm bass work fills up a nearly-80 minute set of tracks that are built to last. The melodies, as gorgeous as they often are, draw an emotive line throughout the album that perhaps gives the biggest reason to think this was a human's doing.

Procedural Braindance is absolutely the sound of the future, today. We have arrived!

**Editor's note: Collectors and completionists would be advised to pick up the limited edition CD-R, which features no less than five additional tracks!

W/P by Procedural Braindance. Mastered by The Analog Botanist. This is Recycled Plastics number BC63, and 63rd in the Bedroom Compost catalogue.