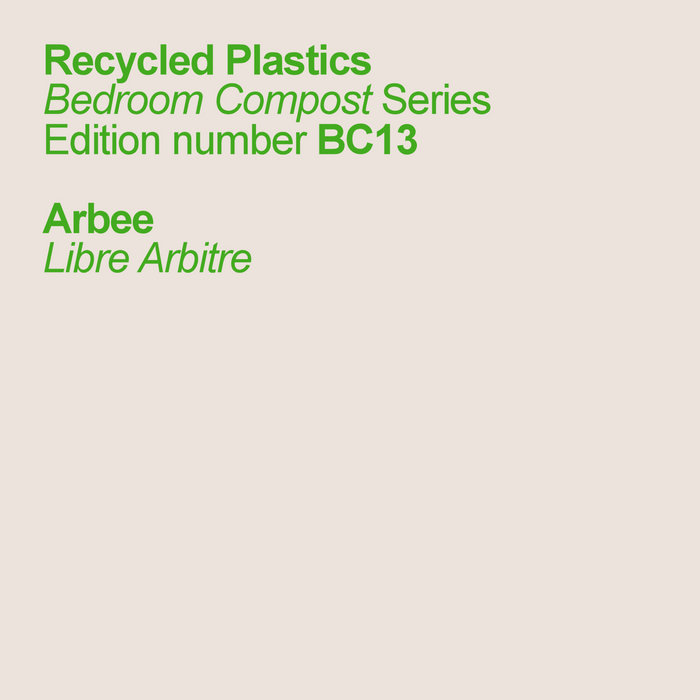 For the final installment of the Bedroom Compost series before we enter a new year, we bring you Arbee's seductive Libre Arbitre album. Virtually bubbling over with wild sprawls of organic electronics, Libre Arbitre delivers a warm, cuddly listening experience that is perfect for Winter. Arbee's standalone style of growing alien forms from familiar electronic pastures is once again at the forefront of these songs - at any moment, a track can twist itself from a still ambient pool of dripping notes into a clattering drunken rhythmic structure, and back again. Arbee's work is not incidentally this way, but his is a decided compositional process that leaves in all the aural hiccups and analog atmosphere.

Arbee's original concept for Libre Arbitre was for the album to include eight original tracks, and have them mirrored by eight remixes. So, the eight originals remain here for free, and the eight remixes are included on the CD-R version of Libre Arbitre. The remix personnel are: Fingers In The Noise, Bleupulp, Darren Harper, Stopmotion, Galerie Stratique, Jonas The Plugexpert, E1000 and Coppice Halifax.

You can stream all eight remixes here: soundcloud.com/recycledplastics/sets/bc13-remixes

W/P by Arbee. Mastered by The Analog Botanist. This is Recycled Plastics number BC13, and thirteenth in the ongoing Bedroom Compost series.