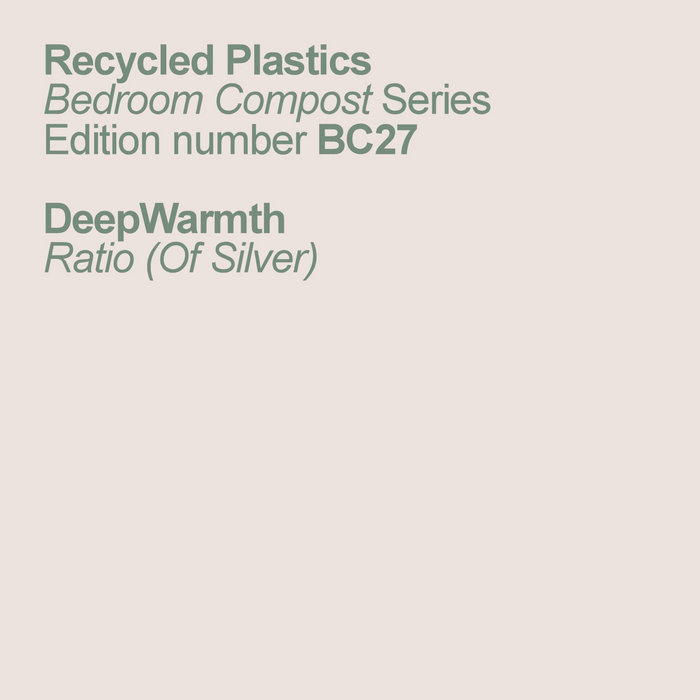 Chris_Question_Mark This one really grew on me. Only bought for the Zander One and C Halifax mix, but after only a few listens while working and this album has been on repeat for a few days. Really deep and quite the exploration into dub. Great music. Favorite track: Ratio (Of Silver) [Zander One Dub].

Prefacing his upcoming debut album for RP (Start Of An Ending, scheduled for release sometime in 2014), DeepWarmth provided us with a lovely expanded-single for his dub techno missive "Ratio (Of Silver)". Watery, wavering chords rain softly down on a static bass and kick rhythm that never deviates from its train track. DeepWarmth revisits and revises his cut on a version, then pulls the curtain back to allow a few other producers to have their own things to say through the window of "Ratio".

Textural Being, appearing here under his newer alias aspect., brings an overwhelmingly feel-good organic techno mix, with hints of lush summery house. Zander One bathes "Ratio" in blue water, freezes it and then slowly thaws it beneath a soft orange lamp. Optic_ reduces it to a gentle fog of wafting chords and nearly unspoken whispering delay trails, while Axs creates a Red Dye reshape that removes "Ratio" from techno confines and transports it to a distant land, somewhere far East, in a crimson desert adorned only by metal bells and stretched-skin drums that are occasionally moved into musical shapes by the lonesome wind. Following this, Ocralab dials in with his usual isolationist approach, sending "Ratio" out into the Earth's atmosphere and re-recording it as it bounces back to him over secret radio waves. Closing the experience is an atmospheric Coppice Halifax remix that burns the original track to ashes, makes pigment with the remains and paints a colorfully subdued piece of Impressionist techno across a sunsetting skyline.

Altogether, the single that becomes an album is a surprisingly varied listen, with very little resemblance to the source material from track to track, and leaves us with high hopes for the next DeepWarmth excursion at RP.

Additionally, Coppice Halifax has issued a very limited edition CD-R containing his Evaporant mix, and a second epic 32 minute remix called Glacial Fortress. You can listen to that here: coppicehalifax.bandcamp.com/album/glacial-fortress

#1-2 W/P by DeepWarmth, #3-8 written by DeepWarmth and remixed by the credited artists. Mastered by The Analog Botanist at Botany Bay, September 2013. This is Recycled Plastics number BC27, and 27th in the ongoing Bedroom Compost series.