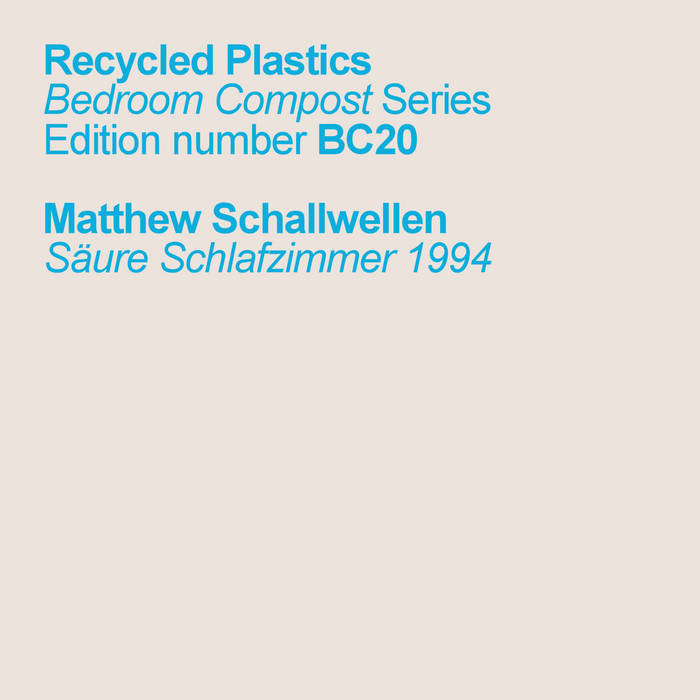 When I performed as Milieu in Augsburg, in 2007, I met a number of interesting artists, epicureans and musicians. One of them was Matthew, a genuine gentleman who showed us around some very nice wine kitchens. After quite a lot of imbibing, Matthew confessed that he tinkered with making electronic music of his own, in his younger days, but after meeting the love of his life, and starting a family, he'd moved on and sold off his equipment long ago. I was curious to hear his music, especially after he told me how he grew up listening to records by Kraftwerk and Cluster, and then in the early 1990s his mind was blown after he discovered AFX. It was RDJ's game changing work that inspired Matthew to get some affordable gear and try his own hand at what he loved hearing so much. So, after I left Germany, we stayed in touch and I have since convinced him to share his music with me, and subsequently with all of you out there. Matthew didn't even have a cassette player so he actually mailed me the master tape - his debut work Säure Schlafzimmer from 1994 - with his blessing to rip it, master it the best I could and share it with like minded listeners. I did as I was instructed, and what you're hearing is straight from the worn out cassette he laid it to almost twenty years ago! As I write this, Matthew is so pleased with my remastering of his early songs that he's actually looting his storage to find the rest of his old recordings, so I'm hopeful that this won't be the last we hear of Matthew's excellent and colorful music. I've omitted the final track - Bedrohung 707 - to make it an exclusive cut available only on the limited edition CD-R. There are only 50 copies of this in existence, so don't miss out!

W/P by Matthew Schallwellen. Recorded at SMS in Augsburg, Germany, 1994. Remastered from tape at Botany Bay, 2012 by The Analog Botanist. This is Recycled Plastics number BC20, and 20th in the ongoing Bedroom Compost series.