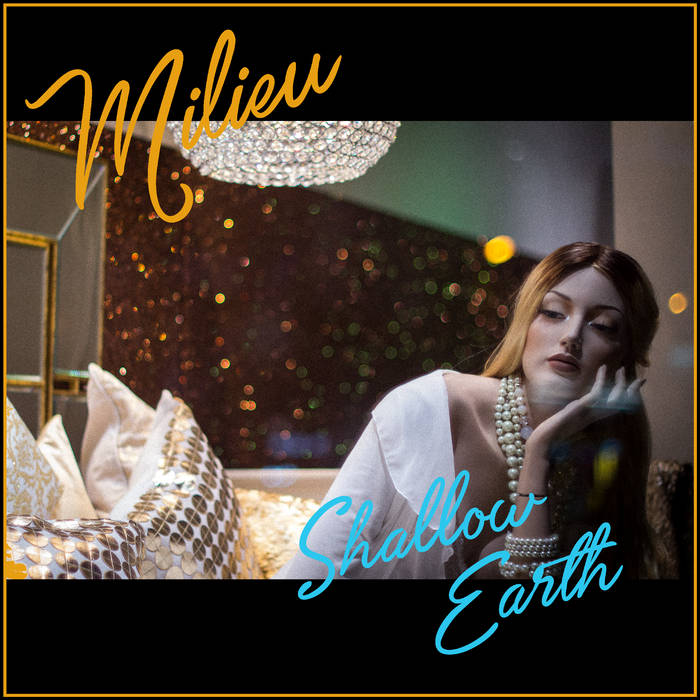 James Shain The party album from Milieu you never knew you want, but totally need. Such a playful vibe about this entire album, and it makes you wanna get up and dance the night away Favorite track: Harlequin Salon.

ghOsty Lush, summery sounds, like hanging next to a pool on a warm day

So, last year, Sun Cast happened. The culmination of eight years of recording and writing work, in three studios. Somewhere within the completion of Sun Cast, a second album was gestating, although...as the joke goes...I did not know I was pregnant at the time. As the fumes cleared and the tide receded from Sun Cast, this second album came to be known as Shallow Earth - an intentionally loose, playful, almost low-brow pass at Milieu album, and a much-needed relief from the pressures of Sun Cast's final lap.

Shallow Earth was a title mentioned as a friendly joke by a confidante, playing against my monochromatic Deep Earth series (as Coppice Halifax), and I felt that it was the perfect summation of what I was attempting to do with this material. For a long time, I'd wondered what it might sound like if Milieu attempted to make tracks using the free-running sampling ethos and late 80s/early 90s aesthetic influence that so-called vaporwave recordings have used. Shallow Earth is just the latest example of me setting out to accomplish a thing, and inevitably getting drawn off on tangents and never quite arriving at the thing I set out to do. What you hear on the album is the sound of Milieu having a dance party with a massive amount of samples from pop and dance tracks that I grew up with, bouncing up and down on sofas and beds in my socks as a little kid. Some sources are obvious, others...less so. I don't want to name any here outright, out of respect for the original artists, and a small fear of litigation. The internet has elasticized what's acceptable for sampling, both culturally and ideologically, and it should go without saying that Milieu just wants to have a good time (with or without clothes).

Shallow Earth is Sun Cast's drunken party-animal sibling, eyes watery with too many bong hits, beaming smiles at every stranger he sees, "Pretty Vacant" and blissfully ignorant of a tomorrow morning that will never ever arrive. Slurred words, blurry edges, not keeping track of time, pushing that bass way too hard and riding the pitch wheel wobble. At the end of the night, he passes out in the grass after spray-painting the lyrics to Electric Six's "Synthesizer" on the side of your parents' house. Shallow Earth is deliberately topical, feel-good electronic music, a palate/palette cleanser, ready for Springtime and sunshine, or CRT displays, video games and cassette decks for when the rain decides to fall. Somewhere within it, are the through-lines that have continued to be the voice of Milieu recordings for years - tropical climes, technicolor melody overload, bent New Wave flangers, greasy Freescha-overdosing funk and some kind of implied past life fantasy, that seeps out of the speakers like a drug.

For the occasion of my 36th birthday, Shallow Earth is the perfect celebration. To make it extra special, our longtime comrades at Illuminated Paths are also issuing a super-limited-edition cassette version of Shallow Earth. The "Illuminated Paths Party Mix" is a 120-minute extended version of the album, with additional tracks, alternate mixes, warped VHS-tape mastering from Broken Machine Films and a completely different art design. You can obtain one here on 05/17: illuminatedpaths.bandcamp.com/album/shallow-earth-party-mix-ip-cassette-exclusive

Additionally, there will be two singles from Shallow Earth, issued on 3" CD-R at Milieu Music. The first, "Amber Petrol'r" is out prior to the album, backed with two non-album b-sides: milieumusic.bandcamp.com/album/amber-petrolr . The second single will follow after the album's release on May 17th.